Radio host Mel Greig recently wrote about feeling ‘’shamed’ for posting about her weight loss on Instagram, after she came across this viral meme: 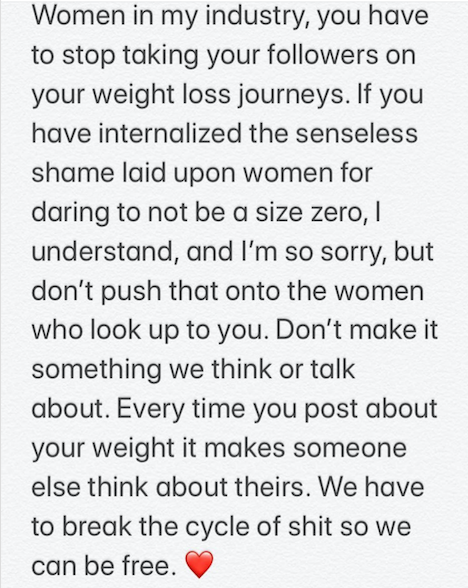 The woman who posted the meme is Jameela Jamil, a British television and radio presenter, model and actress. She’s calling on her celebrity colleagues to consider the impact on women when those in the spotlight continuously talk about weight loss. In diet culture, female celebrities, although definitely not the only source of the Thin Ideal, form a significant tributary flowing into the great river of Body Scrutiny which dominates so many women’s lives. I thought Jameela’s post was pretty damn fantastic, and sorely needed.

But not Mel. Because her Insta feed is currently chockers with posts about her ‘weight loss journey’. Mel did the “Who 10-week Best Body Reboot,” roughly the 400 millionth ‘body transformation’ story run by Who magazine, a publication notorious for thrusting the thin ideal on women, in a grimly predictable weekly cycle.

For 10 weeks, Mel was put on a very strict diet and exercise regime concocted by a fitness trainer from Sydney’s Eastern suburbs (the most ruthless type). Her ‘body transformation’ was gushily presented in last week’s Who magazine, alongside the ubiquitous before and after shots (and no, I’m not going to show them here!). 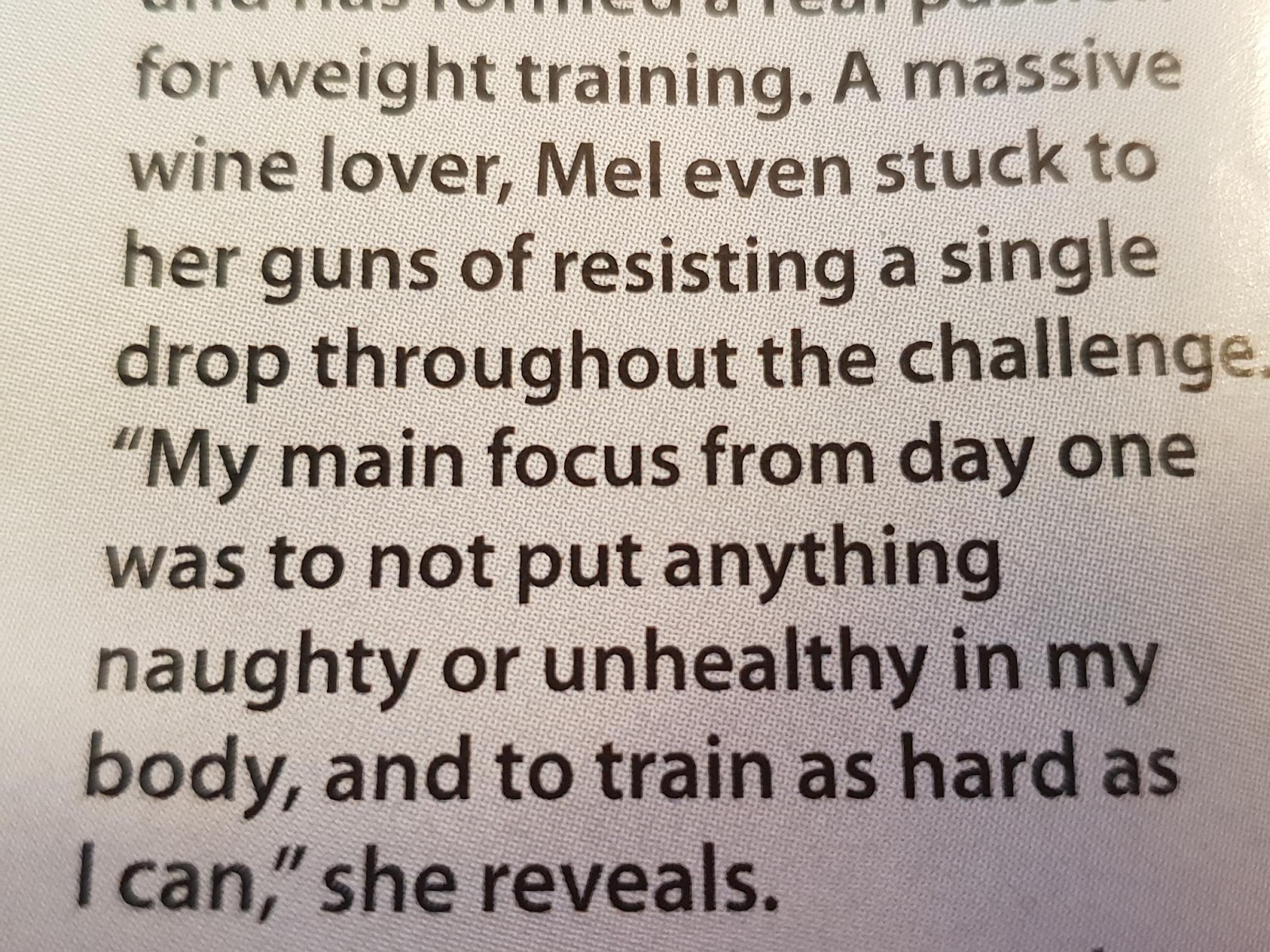 It’s just the same old crap we’ve heard a billion times. There is literally nothing to see here. We know the trajectory of this story: woman undergoes brutal body transformation regime, during which she willingly submits to extreme deprivation and smiles winningly throughout. Woman loses weight. Fireworks, exclamations of joy/happiness/pretending it’s not about the weight loss, alongside AFTER PICTURES and THE BIG REVEAL. Then the woman vanishes. A year or two later, woman is back to ‘before’ picture status, blames herself for the weight creeping back on….and is ripe pickings for the next ‘challenge.’ This is Oprah’s story, Magda’s story, countless millions of womens (and mens) stories. The science is clear: weight loss diets do not work in the long term. Diets must be seen for what they are: temporary dips in our heavily defended preferred body weight. The science on this is unshakeable: we are as certain that weight will return after a diet as we are that smoking causes lung cancer. We must stop blaming ourselves for this regain, and start embracing a different approach to the care of our bodies.

But I digress. Let’s get back to Mel’s article, in which she indignantly defends her right to thrust her current weight loss dip in our faces.

Mel justifies her weight loss advertisement by conflating it with ‘health’. She professes that for the past year, she’s been drinking 2 bottles of wine a night, and ‘smashing junk food’. She also says she’s suffered from depression and broken sleep. It’s clear that treating your body in this way isn’t exactly health supportive. Changing these habits and embracing behaviours which support health are fantastic, empowering, life changing decisions to make. But when we add severe calorie restriction and punishing exercise regimes to such behaviour changes, any health message is lost, replaced with the all encompassing, deafening narrative of weight loss at all costs. I spoke with my friend Dr Natalie Jovanovski, feminist author, about this topic, and she had many things to say! Including this – “Eating vegetables and exercising are not the problem. The problem is when we start to base our success on how our bodies look. These messages are contagious, and they plant the seed for what psychological and feminist researchers call “self-policing behaviour”.

The truth is, Mel’s health would have likely been greatly improved simply by more moderate drinking patterns, getting better sleep, doing moderate levels of exercise, and eating a wider variety of foods. The calorie controlled diet is utterly unnecessary to improve her health.

“At the very least, call it [your weight-loss journey] getting stronger, getting faster or getting fitter,” she says. “Think about problematic wording. Don’t call it losing weight, [because] that implies taking up less space. That implies there is something wrong with your curves. Women who follow you may be the same size or bigger and you send an instant message to them that they need to change, whether you mean to or not. That’s how it works.”

Like Jameela, I wish that more celebrities and people with influence would model an emphasis on sensible behaviours and really turn the volume down to ‘mute’ when it comes to weight. Mel pays lip service to feeling ‘healthier’ but all of her conversation is focussed on reducing weight. There is nothing implicitly ‘healthier’ about becoming lighter. Her assertion that her weight loss is just due to ‘more healthy behaviours’ totally ignores the reality that the trainer put her on a significant calorie restriction and imposed punishing levels of physical activity, designed to further push the calorie deficit. When people make health behaviour changes without calorie restrictions, their health indicators improve, and their weight tends to remain relatively stable.

Mel defends her ‘right’ to ‘better herself’ through weight loss. Her body, her choice, she says. I couldn’t agree more: what we choose to do with our own bodies is absolutely our choice. But recognising why we all believe that weight loss makes us ‘better’ is not something Mel is attending to. As Dr Jovanovski comments:

“Women in the 60s and 70s came together and coined the term ‘the personal is political’. They did this by recognising that our personal lives – which includes our thoughts, feelings and choices – are a direct reflection of the world around us (i.e., the political). We didn’t just wake up one morning and think, “Wow, my thighs look awful!” We were taught to feel this way. We cannot be afraid to ask questions about how and why we police our bodies – and that includes asking other women questions, too.”

We need to remember that the choices we make are influenced by the culture around us. We only think that weight loss is always good in a culture which is relentlessly fatphobic.

But there’s a huge difference here which Mel is overlooking. Becoming a parent, or doing charity work, is not implicitly harmful or oppressive. Whereas weight loss dieting is not only ineffective, but psychologically and physically harmful. It’s not about being politically correct, or not hurting people’s feelings, it’s about stopping harm, and standing up against female oppression.

Mel’s next point of argument is to tell us that we ‘just shouldn’t compare’ ourselves to her, and that in order to protect ourselves, we can choose to look away. Dr Jovanovski’s opinion on this – “As much as we are told to “look away” from messages that we find offensive, that doesn’t make the messages go away. As feminist Susan Bordo explains, the body-policing messages that surround us are like water to a fish – we absorb them and we’re not even aware of it.”

Given how much evidence there is to attest to the thin ideal doing damage to women (and men, and kids….), I think it is well past time for female celebrities in positions of ‘influencer’ power to take responsibility for the spread of harm, and to stop participating in it. Not to tell us to look away while they participate in it! This kind of argument is reminiscent of the gambling industry – busily sticking pokie machines into every pub they can find, and then blaming people for getting hooked on gambling. I think we really need to view all celebrity weight loss ‘transformations’ the way we see pokie machines or cigarettes: evidence of an evil industry hell bent on our destruction.