In diet culture, the competition to sell us stupid weight loss products is fierce. Weight loss is a massive industry, worth an absolute mozza to entrepeneurs keen to take advantage of our cultural obsession with thinness.

It’s a tough sell, because literally no weight loss gadgets/hacks/products actually work, but reality doesn’t seem to make a dent in a) marketing efforts, or b) people’s desire to believe that easy, long term weight loss is possible.

I recently came across a particularly egregious example of how businesses are taking advantage of our global appetite for weight loss. It stood out because sharks in the form of plastic surgeons are taking advantage of the utterly stupid advice of one weight loss technique as an opportunity to sell a more high tech, expensive but ultimately equally stupid version of the same idea.

A news sharticle* recently appeared with the headline “Blow Out: Stupid New Weight Loss Craze That Claims Women Can Melt Their Belly Fat Using A Hairdryer is Slammed by Doctors.”

Apparently, plastic surgeons are ‘concerned’ about a new trend involving people blasting their tummies with hairdryers in an attempt to melt away their belly fat.

Apparently, a clickbait website called Brightside is luring people to watch a badly produced YouTube video called “12 tips on how to lose weight without strict diets” (no, I haven’t added the link because it is REALLY STUPID). One of the ‘weight loss hacks’ recommended involves using ‘hot poultices’ to target ‘problem areas’ like your belly, which you can apparently shrink away by using a hairdryer to encourage water loss (ie, make you sweat**).

1 million people have watched this video, a fact which is almost too depressing for words. But clickbait hits on a dodgy backwater of the internet hardly constitute a ‘weight loss trend’, as implied by the somewhat hysterical tone of the article. 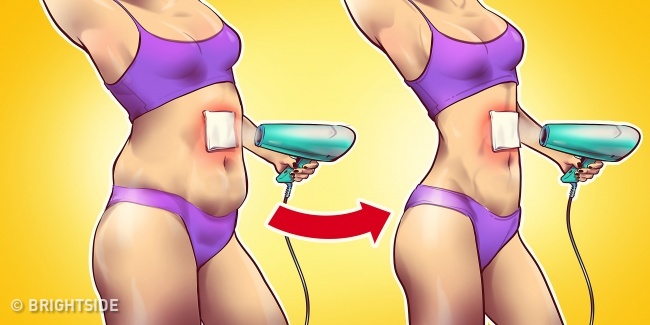 Blow-dry your belly away? Clickbait, #notaweightlosstrend

Just in case we couldn’t discern for ourselves that burning our skin with a hairdryer is a stupid thing to do, Dr Christopher Inglefield, plastic surgeon and Thin White Male, confirmed that it’s stupid, but used bigger words to describe why. Now call me cynical (again), but in my opinion the level of social conscience in plastic surgeons is on par with that of a cigarette company. Dr Inglefield’s true motives were revealed when instead of telling people to leave their bellies the hell alone, he immediately recommended the nifty sounding ‘Ultrashape,’ which apparently ‘targets pockets of fat in stomach [sic] by using an ultrasonic wave device’.

“Don’t do that stupid thing. Pay for our much more expensive stupid thing instead”
– Dr Inglefield

So WTF is an Ultrashape? It looks like a cross between a Dalek and a vacuum cleaner, and it’s essentially a really expensive belly hairdryer. Ultrashape uses ‘low-frequency sound waves’ to put pressure on fat cells until they burst. They call this ‘ultrasonic cavitation’. I call it ‘playing laser tag through your belly button’, or ‘a giant waste of time’.

Believe it or not, this really is a thing, and people really do buy it. It’s NOT cheap – generally, people are told they’ll need somewhere between 8-12 sessions for ‘optimum results’, and at @$300 a pop, that could buy you a shit tonne of hairdryers.

Does it ‘work’? – well, technically perhaps a bit, but not really. There is definitely a process of fat cell explosion and small differences in fat cell sizes are being proudly flaunted in research articles. Because essentially the walls of a fat cell have been perforated, and some stuff oozes out. But visible, detectable changes to the belly’s appearance only happen if you’re thin to begin with, the Dalek laser beams can’t penetrate far into your belly fat, it has no effect on hard to get fat cells (or cellulite), and it doesn’t produce weight loss. Plus, any results are only temporary, as this website states:

“Ultrasonic cavitation does not destroy fat cells; rather, it empties them of their contents, which means the cells are capable of storing fat again”

There are loads of plastic surgeons and beauty industry people out there feverishly promising to melt, freeze, or otherwise frighten our fat away using impressive looking machinery. But the hype is just that: a 2015 journal article concluded that:

“Although these devices are widely used, there is little significant evidence to support their effectiveness in body contouring.”

The stupidity inherent in media reporting like this is breath taking. The best way to discourage a particularly stupid trend is not to give it massive amounts of media coverage. And certainly not to replace one stupid piece of advice with equally stupid and more expensive versions of it. I am so tired of this constant implicit body shaming! LEAVE OUR BELLIES ALONE!

Thin White Men have a lot to answer for, which incidentally is the topic of my latest episode of the All Fired Up podcast, in which my guest Virginia Sole-Smith disembowels the history of our current wellness obsession. When we think ‘wellness guru,’ we might conjure up images of people like Gwyneth Paltrow or Sarah Wilson, in all of their shiny haired, gleaming smug-glow, but this entire trend was sparked by men like Michael Pollan (In Defence of Food). I highly recommend listening!

​If you’d like to make love, not war, with your belly or any other part of your body, check out my mini e-course “Befriending Your Body”. Diet culture disconnects us from our bodies, and it’s hard to take care of something when we’re not connected to it. In Befriending Your Body, you’ll receive an email from me, every day for 10 days. Each email includes a guided meditation to help you build up the skill of self-compassion as a way to build a sense of peace with food, exercise, and your body. These are not diet tips. Self-compassion is a powerful weapon which will break you free from the trap of food and body obsession for good. Befriending Your Body mini e-course is cheap – just $47, and you will have the material forever! Join up today!