It’s no secret that I am more than a little fired up about the Fast Track to Health trial, a weight loss experiment which is recruiting Australian teenagers for a gruelling year long semi-starvation diet. An article in The Age newspaper about the Fast Track controversy recently stated that:

“While the trial is the first of its kind, Professor Baur said it had come off the back of a successful pilot program in which 25 teenagers followed a similar model and saw benefits in their cholesterol, blood pressure, liver and heart function.”

The Fast Track research team have a history of being overly optimistic in their research. Is it possible that once again, the conclusions don’t match the data? Let’s take a deeper look at the newly published study, and see what actually happened in their ‘successful pilot program’.

45 teenagers were approached, and 30 were ‘recruited’ from a hospital based childhood O clinic. The teens were aged 12 to 17, there were 25 girls and 5 boys. The experiment ran for 6 months and was based at Westmead hospital in Sydney, under a dietitian. There were no psychologists or eating disorder specialists involved. For the first 12 weeks all of the kids were placed on Optifast (shakes) and allowed just 600-700 calories a day for 3 days of the week. The rest of the week the kids were told to follow ‘healthy eating guidelines’.

The kids were given a Fitbit, but were not given any instructions about physical activity. Mysteriously, the pilot paper never discusses the fitbit results.

So what happened to these kids – did they lose a lot of weight and improve their health? Here’s a summary of the results:

Let’s take a closer look at the results: 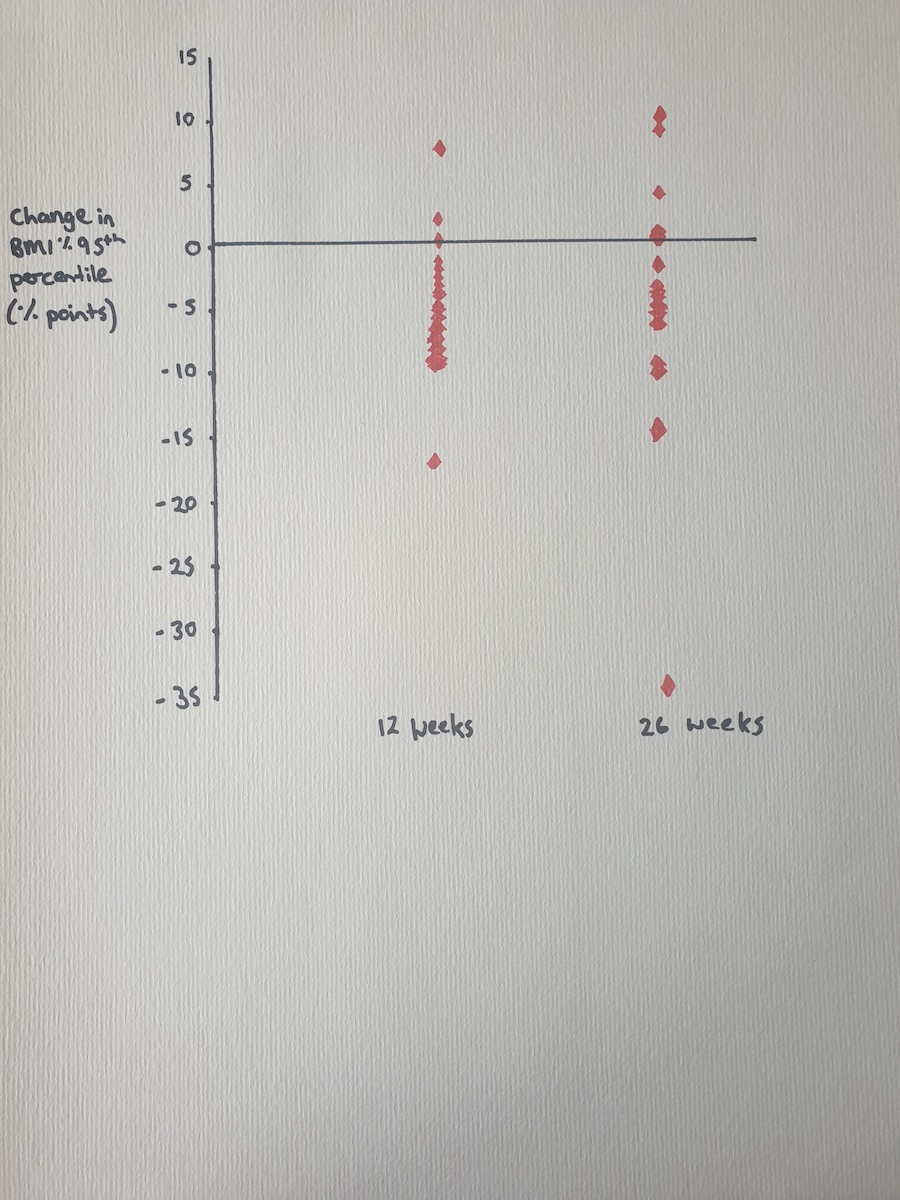 In spite of a global petition to stop the Fast Track trial signed by more than 20 000 people, multiple complaints to the Ethics committee who approved it, statements from eating disorders organisations around the world expressing extreme concerns about the risks, and a whole stack of media attention, the Fast Track trial looks set to go ahead. The risks of this type of severe and ongoing calorie restriction on growing teens are being minimised by supporters of this trial. In a collaborative effort, a new website has been launched to help inform the general public about the risks of teens developing eating disorders from extreme dieting. Please help spread awareness of this information hub!

There’s also a podcast episode where I go through the results of the Fast Track pilot study, followed by an interview with Ruth Leach, eating disorder survivor and anti-Fast Track campaigner. It’s a not-to-be-missed episode – click here to listen!

** Fun fact About Figure 3 – originally I had posted a picture of Figure 3 taken from the journal article itself, but the Fast Track researchers helpfully wrote to the editor of the Journal of Nutrition to complain that this breaches copyright, and I was sent a letter from the editor telling me to take the picture down. So I drew a picture of the figure instead, and now copyright is not breached. How ridiculous is this!! And how interesting that the Fast Track researchers were ALL OVER this issue, when it’s been several months since the eating disorder organisations asked them for basic information about the consent forms for their trial, and they still haven’t gotten around to doing that! #priorities!

If you’d like to make love, not war, with your body, check out my mini e-course “Befriending Your Body”. Diet culture disconnects us from our bodies, and it’s hard to take care of something when we’re not attached to it. In Befriending Your Body, you’ll receive an email from me, every day for 10 days. Each email includes a guided meditation to help you build up the skill of self-compassion as a way to build a sense of peace with food, exercise, and your body. These are not diet tips. Self-compassion is a powerful weapon which will break you free from the trap of food and body obsession for good. Befriending Your Body mini e-course is cheap – just $47, and you will have the material forever! Join up today!