In Australia, the weight loss surgery industry is booming. Over a 10 year period, the total number of operations has more than doubled – from 9300 in 2005 to 22,700 in 2015. And these surgeries are definitely targeting women – although “obesity” rates are pretty much identical in men and women (roughly 28%), 79% of all weight loss surgeries are performed on female patients.

It’s understandable that weight loss surgery is becoming wildly popular, especially as more and more people become aware of how ineffective dieting is at sustained weight loss, and gastric surgeons get better at marketing themselves. Although I work from a weight-inclusive perspective, respecting the inherent diversity of body sizes and rejecting the pathologising of larger bodies, I never judge people who have chosen to have weight loss surgery. The pressure on people to be smaller is simply enormous, and I am not surprised when people elect to take this path. But what about the impact of these operations on mental health?

A research paper just released from Western Australia (WA) found strong evidence that weight loss surgery is VERY bad news for mental health. This was a huge study, following almost 25000 patients (77% females, average age of 42) over a 15 year period. The results showed that after weight loss surgery, patients were two to three times more likely to be hospitalised, visit the emergency room, or visit an outpatient clinic for a psychiatric illness. Increased rates of various types of psychiatric illness were seen following surgery, including psychoactive substance abuse, as well as mood, neurotic, behaviour, personality, and schizophrenia-like disorders.

Worryingly, the results also showed a nearly five-fold increase in people attending hospital emergency rooms after deliberately self-harming, and nearly 10% of all postoperative deaths were suicides. When you compare the suicide rate in the general population of WA to the suicide rate in people who have had weight loss surgery, the picture is truly confronting: 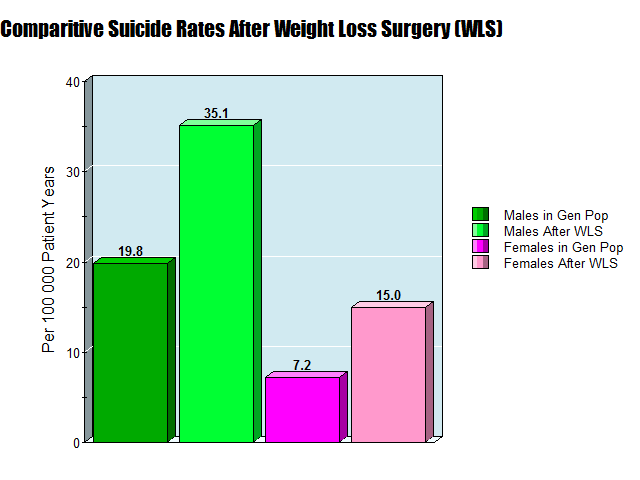 In spite of these alarming results, the study’s authors did not call for an immediate stop to bariatric operations. In very measured, beige language, they droned on about the importance of a “multidisciplinary, perioperative plan for patients that ensures access to mental health services after surgery.” It grinds my gears when researchers say this. As if throwing psychology appointments at people after the fact can fix things? Access to mental health services is all well and good, but why aren’t they more curious about why this surgery makes people’s mental health deteriorate, to the point where they take their own lives ??

The researchers were completely uninterested in the complex reasons people suffer following bariatric surgery, they just blamed Aussie bariatric surgeons for not being strict enough at excluding people with pre-existing psychiatric conditions from having the operations. But their own data showed that 40% of people accessing emergency psychiatric services had no pre-existing history: their mental health problems developed after the surgery. And the researchers also admitted that there was no proof that taking extra ‘precautions’ with ‘multidisciplinary teams’ would do anything to stop the carnage. But apparently they are ok to just let this mental health disaster continue, and try to ‘scientifically prove’ whether or not perioperative psychological assessment and ‘support’ will do anything to stop people dying: effectively treating fat people like guinea pigs.

I almost don’t have words to express my horror and fury at the cavalier attitude here. And tragically, this paper is not even the first to show a massive increase in suicide after weight loss surgery. A meta analysis reviewed 28 studies and found that compared to the World Health Organisation’s data on the general population, suicide risk was increased four-fold amongst people who had weight loss surgery.

So what on earth is going on here? Why is an operation which is seriously upping the suicide rate not leading to more action? If penis enlargements were found to double or quadruple the suicide rate, can you imagine the outcry?

When it was discovered that children and young adults experienced a spike in suicidality after starting anti depressant medications, the FDA forced pharmaceutical companies to print mandatory ‘black box’ warnings on all of the packages, ensuring that consumers were warned about the serious safety concerns and risks. A black box warning is the strongest the government can give – just shy of withdrawing them altogether. This decision was based on analysing the data of 4400 young people, where they found that the risk of suicidal thoughts and impulses was double that of the placebo groups.

So for weight loss surgery, we have data on at least 50 000 people (just based on the papers I’ve discussed in this blog), and there is crystal clear evidence that the ACTUAL SUICIDE RATE – not just suicidal thoughts and impulses – is at least double, and perhaps as much as four times higher than normal – but no-one’s talking about warning potential patients???

WTF IS WRONG WITH THIS PICTURE!
WHERE’S THE BLACK BOX WARNING FOR WEIGHT LOSS SURGERY?

It is criminal that this academic paper didn’t even bother to DISCUSS the need to warn people. Consumers have the right to know if an operation is likely to increase their chances of self harm, suicide, and major mental health issues. The fact that it’s not even being raised is weight bias at its most loathsome: the pursuit of thinness literally AT ALL COSTS, and the gross mistreatment of humans in larger bodies.

In an even more disgusting twist to this dark story, an article in “AusDoc” about the WA research included comments from one of Australia’s best known bariatric surgeons, Professor John Dixon. Professor Dixon’s entire career has been essentially sponsored by Allergan, the pharmaceutical company who make the lap bands he so enthusiastically slips into anyone who moves. Dixon’s party trick is targeting vulnerable populations, such as economically disadvantaged Aboriginal teenagers, for his stomach banding experiments.

Instead of expressing horror or even concern at the findings, Prof Dixon played dodgeball. He began by denying any problems, stating that bariatric surgeons “don’t treat people with mental illness or who are unstable,” and then deftly turned the whole issue into an ad for gastric bands, claiming that they “had fewer mental health problems linked with them”. Another gastric surgeon quoted in the story, Dr Ahmad Aly, head of upper gastrointestinal surgery at Austin Health in Melbourne, just went on the defensive, saying that “the authors’ criticism of bariatric surgeons could not be justified on the data presented.”

Fragile male egos aside, let’s remember: this is not a criticism of surgeons, it is DATA. Data that shows that TERRIBLE, IRREVERSIBLE HARM IS BEING DONE. There is something about these operations which leads to suicide. People are DEAD, and many more are self harming and suffering from mental illnesses so serious that they’re showing up in our public hospital emergency rooms. I can’t imagine how many countless more are suffering alone. And no-one seems to be particularly alarmed by this.

It’s utterly reprehensible that bariatric surgeons can read this research and then outright ignore the reality. People’s lives are at stake, and in the face of insurmountable data, they’re not even able to have a proper conversation? Whatever happened to first, do no harm?

It is ludicrous that we’re at a place in which dangerous, life-threatening surgeries are doubling in numbers and being touted as some kind of weight loss panacea, and no-one seems to care about the human cost.

If you are struggling with issues relating to food, your body, exercise, or with an eating disorder, I can help! I’m available for online appointments – just a click away! If you’re a health professional I also love to do online supervision, and the books are currently open, so send me an email at louise@untrapped.com.au and let’s get started!

If you’re into online courses, check out my mini e-course “Befriending Your Body”. Diet culture disconnects us from our bodies, and it’s hard to take care of something when we’re not attached to it. In Befriending Your Body, you’ll receive an email from me, every day for 10 days. Each email includes a guided meditation to help you build up the skill of self-compassion as a way to build a sense of peace with food, exercise, and your body. These are not diet tips. Self-compassion is a powerful weapon which will break you free from the trap of food and body obsession for good. Befriending Your Body mini e-course is cheap as chips – just $47, and you will have the material forever! Join up today!