(*Swear warning again – sorry, I really couldn’t hold it in)

They’re at it again! The bullshit artists formerly known as Weight Watchers are disguising their advertorials as ‘news!’

I‘m not exactly surprised, but CRIKEY this grinds my gears.

I don’t click on articles about weight loss, and I have gone to great lengths to protect my SM from lechy weight loss wolves. But the other day I was idly reading through the nine news website, and it mentioned that one of the Masterchefs had made “a life-changing decision.”

Now, I am not proud to admit to being interested in celebrity gossip, or seduced by click-bait, but at that moment I had to know what chef Gary Mehigan had decided.

It was lunchtime, I was bored, I was very likely procrastinating from something which actually needed to be finished.

So I clicked, and boom – there I was, smack bang in the middle of a WW advertorial!

Gary hadn’t made a life changing decision. Gary had signed up as a WW “ambassador,” meaning that he’s being PAID to talk up their shit program, and this isn’t ‘news’ at all.

It was a painful read, but I waded in. I was worried about Gary, and felt compelled to see just how low WW are stooping to snare new customers. They’re serial offenders, so much so that I’ve done 2 episodes of the All Fired Up! podcast about their nefarious tactics. Obviously MEN are in their crosshairs now, probably after their efforts to target teenagers were scuppered by major media backlash. Who’s next, WW – babies?

Their trophy male is Gary Mehigan, ‘celebrity chef’ from Channel 10’s Masterchef series. He’s always ‘struggled with his weight’ – (read: he’s always lived in a larger body, and likely has always been made to feel bad about it). Gary’s tried all sorts of fad diets, but none of them have ‘worked.’ (See how they cleverly differentiate themselves here from all of those nasty ‘fad’ diets? This is a marketing angle that they repeat in almost every ad – WW ‘works’, even though the research shows that’s blatantly untrue).

What made me feel sick was the way the infomercial frames Gary as being on a “journey to health,” in spite of the fact that he is actually already in good health, confirmed by a doctor who failed to find anything seriously wrong with him. In addition to eating a sensationally varied diet, Gary is very physically active, so by all accounts, his health behaviours look positively fabulous.

So what’s the real agenda here?

This is where things get very slippery. Because actually, Gary just wants to lose weight. And WW also want Gary to lose weight so they can gloat about it on breakfast tv during that brief window before he puts it all back on again. BUT, in the new and ever more gaslighting age of selling weight loss, it’s very important that we never admit that anyone is ever trying to lose weight, and to instead wank on endlessly about vague concepts like ‘energy’, ‘sluggishness’, or ‘wellness’.

Of course, the truth is revealed once you click through to the WW website (please don’t), where in plain English is Gary’s real aim: 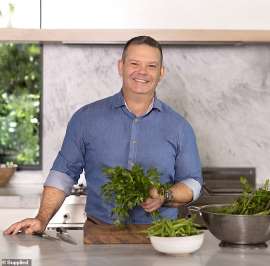 Gary – Losing 10kg is a weight loss goal, not a wellness goal.

But back to the wankery. In spite of the fact that Gary’s health is fine, he has put on some weight (a perfectly normal human experience as we age – check out the stats on p.12). So WW proceed to frame the weight gain itself as ‘unhealthy’. Because once we’ve covered everything up with a nice shiny health halo, no-one can criticise it! Marketing genius!

Let me just say this: There is no such thing as an ‘unhealthy’ weight. Particularly if a person has no health issues. It is true that higher body weight is correlated with increased risks of development of certain health problems and early mortality. However, research shows that when people’s health behaviours are taken into account, these risks are greatly reduced. In a nutshell, if a person is practising health supportive behaviours (like Gary is), then their risk of developing what are perceived as weight related health problems is reduced. Exceptions can apply here, particularly if people carry a strong genetic vulnerability to developing chronic disease (but of course, genetic predisposition hits thin people as well). People get caught up in the idea that losing weight is the only way to reduce our health risks, when in fact weight loss from dieting is not related to health improvements. There is a robust and growing literature to show that the ‘bang for our buck’ in terms of reducing risk comes from tweaking our health behaviours, even in the absence of weight loss.

But like many people caught up in diet culture’s web, Gary is confusing weight with health, and WW are only too happy to capitalise on that confusion – after all, that’s their business model!

I’d like to take a moment here to rant briefly about Weight Watchers changing their name to WW. Their claim that this name change means they’re completely transformed and totally not about weight is about as convincing as when Kentucky Fried Chicken changing their name to KFC and said their food was different. The only thing that’s changed is the name! It’s more marketing-speak in an effort to make us forget WW’s real agenda, which is to continue to push a shitty and ineffective diet program at people, and rely on repeat business to keep the profits rolling in.

OK, so here’s the bit of the ad which made me yell OH SERIOUSLY GO TO HELL at the top of my lungs, and scare the cat:

“WW uses a points system to help clients make healthy food choices but also focuses on making general lifestyle changes, eating mindfully and taking care of mental health. The company has announced a new partnership with Headspace to help with this.”

I will do my best to not swear too much in this section, but seriously? This is doublespeak, co-opting, gaslighting and legitimacy washing all in ONE SENTENCE. There’s so much fuckery in this paragraph it’s practically pregnant. I’m so pissed off that I can’t form whole paragraphs to refute, so I’m using bullet points to translate it into plain English:

Unable to swallow any more hype, at this point I needed to minimise the screen, take some lovely mindful breaths (0 points!!), and then proceeded to play the most appropriate meditation for this kind of situation.

In closing, if WW advertise, they should have ‘advertisement’ written in clear letters all over their ‘articles,’ and stop pretending there’s any news here at all.

Right, that’s it from me for this week, I do apologise for the increase in swearing in recent posts – it must the the time of year!! I am sure you’re feeling it to – the increase in pressure from diet culture. Please take good care of yourself, and swear freely,

Time for a nice lie down.