My 10-year-old daughter is doing her NAPLAN tests at school. We received a cute little note from the teacher to help the students practice self-care during what may be a stressful week. There was a list of ‘tips’ which parents were asked to sign off on. Most of these were common sense and kind – things like getting enough sleep, drink lots of water, get out into the fresh air….

But one of the ‘tips’ was about ‘not eating junk food’ which is apparently ‘bad for your brain’. The kids were told to eat ‘good brain foods’ like salmon and veggies instead.

This got RIGHT UP MY NOSE. In the middle of exam week, here comes the food guilt. Our impressionable children are being explicitly told that ‘junk food’ is bad for their brain. 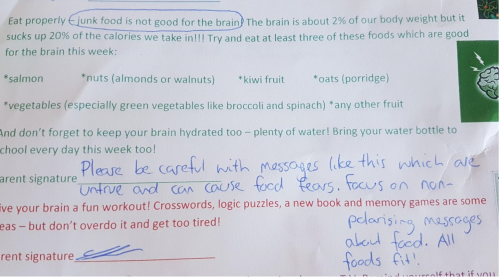 As you can see, I gave the teacher a little bit of feedback. Messaging like this gets me seriously irate, for so many reasons.

I have a client with a child a couple of years older than my daughter. When she was in year 5, she did a health unit at her primary school. And of course, the kids were taught the difference between healthy and unhealthy foods.

This innocent child quickly became anxious about eating only healthy foods, and refused to eat anything unhealthy. At first, her parents were happy with her new awareness and enthusiasm around the food choices she was making. But things quickly span way out of control. Her weight plummeted, and her BMI dipped down to 14.

She was soon diagnosed with Anorexia, and the agonising process of eating disorder treatment began. She had to be hospitalised and fed through a tube. Her heart rate at admission was 38 beats a minute. It was touch and go. Her mother quit her job so she could care for her daughter’s greatly increased needs.

Since then it has been a long, slow, painful process of weight restoration. Through sheer determination and dogged meal policing, mum and dad have dragged their daughter back from death’s door. It took 6 months for mum to get her daughter to eat from anything other than a teaspoon. Each small battle has been a knockdown, drag out fight with the eating disorder. And although she is now medically out of the woods, this poor child still refuses to eat anything she deems to be unhealthy.

Some people have a genetic vulnerability to developing an eating disorder. For these individuals, just one diet or ‘healthy eating experiment’ is all it takes for the illness to burst into life. Just one. And we don’t yet know how to screen for these genes: we simply can’t predict who’s at risk and who’s not.

THIS is why I am irate. In order to raise awareness about healthy eating, supposedly to improve our long-term physical health risks, we’re literally risking the mental health of our kids. Eating disorders are extremely difficult to treat. They have the highest mortality rate of all mental illnesses.

The justification for nutrition education in primary schools is based on scaremongering about ‘the obesity epidemic’ and an apparent tsunami of weight related health conditions. But the health statistics paint a very different picture to the rhetoric. We know that rates of childhood eating disorders in Australia are rising at an alarming rate. In contrast, there was no evidence of a rise in new Type II diabetes diagnoses in young people between 2003-2012 (AIHW, 2012). Statistics from the USA show that the incidence of Type II diabetes in kids is at 12 in 100 000, whereas the incidence of eating disorders is at 2900 per 100 000. A child in the USA is 242 times more likely to have an eating disorder than to have diabetes (Robison, 2007).

Is it acceptable to trade one type of risk for another, much more deadly one? HELL NO.

I think that stats like these need to be screamed from rooftops, aired on the news on an hourly basis, and for public health policies to finally listen. We’re dicing with death here. Can we please just stop?

My little girl and I had a chat about my ‘feedback’ to her teacher. She’s used to me ranting: we have discussions all the time about body diversity, about diet culture, about the ridiculousness of the concepts of ‘healthy’ or ‘unhealthy’ foods. I have done my best to instill in her that all foods fit, variety is the spice of life, that honouring her bodily cues is the best way to make food decisions. Thankfully, her relationship with food is intact so far. I am absolutely proud of her ability to listen to her body.

My adorable girl is also just beginning puberty, and her body is changing rapidly. At the moment she’s one of the largest kids in her class, and she’s been made to feel very aware of that difference. During our conversation, she said to me “mummy, our teachers are teaching us not to be fat, and I am fat, so I must be bad”.

THIS is another reason I’m irate. In school-based nutrition classes, ‘health’ is constantly linked to weight, with thin = healthy and fat = unhealthy. Apparently, no-one is telling the kids that it’s perfectly natural for bodies to gain weight during the preparation for puberty. And in spite of all of my efforts with my daughter, she’s getting the message that she’s not only fat but ‘bad’. It’s diet culture in our SCHOOLS. FFS.

In our house, we use the word fat as a neutral descriptor (like tall, or short), not pejoratively. But my little one understands that in the world around her, people use fat as an insult. Her peers throw it at her all the time, jeeringly. She knows that it’s wrong, that the problem is their prejudice and not her body. But she’s exposed to the prejudice every day, and I worry so much about how it’s impacting her.

So, I am meeting with the principal, and I’m going to see what we can do at our school to shift away from the overly simplified nutrition messaging. I know it’s a big battle, but it’s one I’m willing to fight for.