Acts of Emotional Courage and a Big Vulnerability Hangover

I arrived home late on Saturday night after the 2018 Australia & New Zealand Association for Eating Disorders (ANZAED) Conference, finding my 2 little girls were still up waiting for me. Although it was nearly 10pm, I was so glad they were awake, and I simply couldn’t stop hugging them.

I’m a bit emotionally shredded to be honest. The theme of the conference was “Courageous Conversations,” and, my goodness, it certainly lived up to the title! Professional conferences are normally very staid affairs: presentations of research, updates on theoretical developments, all nicely contained between networking opportunities and polite conversations over terrible coffee*.

Not this one! This event placed people with lived experience of eating disorders, particularly those in larger bodies, front and centre. You see, the eating disorders world (like the rest of modern culture) has a huge problem with weight stigma. It’s totally fatphobic. And this conference was all about calling out this problem, naming it, and demanding change.

It opened with an invitation from the conference organisers – the lovely and utterly hard working Fiona Sutherland & Genevieve Pepin – to consider our language. The way we talk about bodies MATTERS. We were asked to consider not using words such as ‘obesity,’ a term which is inherently pathologising. And to instead use terms like ‘person living in a larger body’. This type of invitation felt revolutionary – for the last few years, people have been cavalierly tossing around the “O” word without censure, in fact last year, after an ANZAED presentation from me & the Fionas (Sutherland & Willer) on why we need to stop using the word, the very next presenter announced she would still use it because saying ‘people in larger bodies’ would take ‘too long to say’! So this felt like a very nice, validating place to start!

And then came the plenary. This was a panel with the wonderful Sarah Harry, Scott Griffiths, and Nicole McDermid talking about weight stigma. Except that as Sarah pointed out, weight stigma is just a polite way of saying fatphobia. Sarah shared her story as a fat person with lived experience of both an eating disorder and weight loss surgery, now working as a psychotherapist and fat activist. Sarah shared that she hadn’t been to the ANZAED conference in several years, because she didn’t feel welcome there – her experience of an eating disorder did not feel like it had a place. It’s true that for a long time, the conference has felt anorexia focused, even though anorexia represents just 3% of people with eating disorders. Binge Eating Disorder is the most common of all eating disorders, representing 47% of sufferers, but you’d never have guessed that from previous professional conferences. Sarah beautifully called on the eating disorders community to work together to identify and eradicate fat phobia by including larger people and their stories. Scott then did a great talk on stigma and how it is a system of oppression. Weight stigma means shaming people for their appearance, attributing moral failure to their bodies. And regardless of ‘health status,’ all human beings are worthy of respectful care.

And then Nicole stood up. She had no powerpoint slides. Just an open letter to the eating disorders community, which she read to us with shaking hands. It was a raw, heartfelt, plea. She spoke about what it was like to grow up in a body which the world told her was wrong. She shared the humiliation of being in an eating disorders treatment unit where the gowns didn’t fit her fat body. The shame of being given an apple at snack time in the ED unit, when everyone else got cake. She talked for 15 solid minutes about how hard it is to be in the world as a fat person, feeling always visible, and yet never seen. 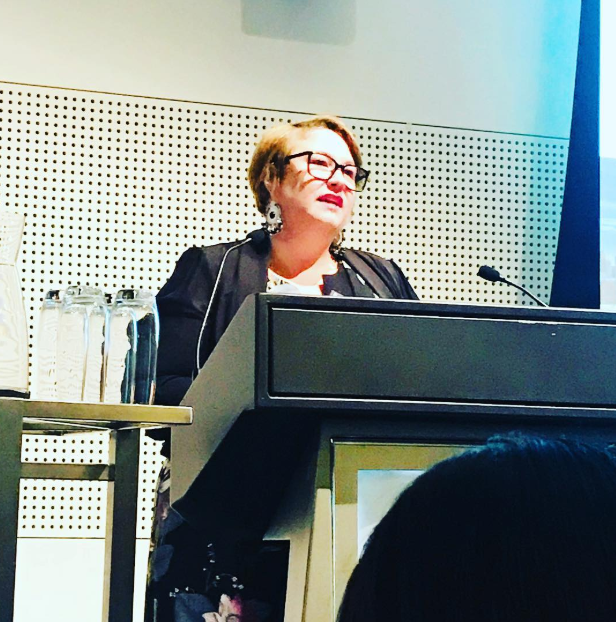 Nicole bringing the house down.

Her words were so, so powerful. It was like being sucker punched right in the chest, and you could feel the pain in the room. There were over 400 people present, and many of them were crying (including me). It was incredible. Nicole was angry and sad, and unapologetically REAL.

She got a standing ovation when she finished, which I have never seen at an eating disorders conference. In that moment, it felt like Nicole’s story had shifted everything. It felt like everyone finally GOT IT.

I am so sad that people like Sarah and Nicole, survivors of horrible psychological illnesses, have had to stand up in a room full of people who apparently specialise in treating their illness, and tell them how badly they’re getting it wrong. I am so sad that they had to do that free labour. We should just know that fat phobia, weight stigma, is wrong. We should know it’s a thing. And we should be doing everything we can to stop it.

Eating disorder professionals should be the experts on weight stigma, always fighting to end it. They shouldn’t have to be educated about fatphobia by sufferers. And my goodness, they should not be perpetuating it! But the sad truth is, the eating disorders profession is just as, if not more, weight biased as the rest of the world. Diet culture infiltrates everything, including the spaces which should be reserved for healing from it.

Janet Lowndes & I had to pull ourselves together to present our workshop on the complexities of treating eating disorders in fat people** straight after the plenary session, which was pretty hard! But somehow we did, and I think we were well received. At the end, we had a fabulous small group discussion where we asked people to design the ultimate weight inclusive eating disorder treatment unit, and we gathered all of their ideas together. We now have a HUGE document ready to email to everyone who came, and Janet & I are also planning to run training workshops on how to create weight inclusive treatment services for health professionals!

Nicole and Ashlee Bennett ran a beautiful workshop where the stories of fat people with eating disorders were presented. Another heart-rending, raw set of more than 20 lived experiences which highlighted just how tough it is to live in a larger body in diet culture, how our eating disorders treatment centres aren’t cutting it, and how the problem lies in our stigma…not the person’s body. Here’s a powerful quote from one of the participants:

Continuing the theme of Courageous Conversations, the fierce and fabulous Clementine Ford, incredible Australian feminist and eating disorder survivor, talked about her own story in her keynote address. She also did a workshop where once again vulnerability, lived experience, and the importance of speaking up against injustice and stigma was the theme. Clementine was so genuine. She did not hold back about how living in diet culture and constantly being told that she was fat as a child had lead to her eating disorder. It was so nice to hear her talk about recovery, and to hear her unapologetically call herself a fat woman. “It’s just a descriptor”, she said. Here here!!

It seemed to me like everyone at the conference felt galvanised, inspired, and at the same time incredibly touched, gutted, and sad at the enormous injustices which fat people in our culture generally, and those with eating disorders particularly, have faced and continue to face. There was a very large representation of anti-diet and health at every size health professionals there, which felt absolutely WONDERFUL! It was so lovely to see old friends and make new connections with this incredible and growing community of devoted people.

But as heart warming and reassuring it was to see the growth of a very determined and passionate group of anti-diet health professionals within the eating disorders community, it was also maddening to witness several acts of fatphobia at the conference itself. Even with all of this awareness raising, even with the stories from real people in larger bodies asking to be treated with respect, the micro-aggressions happened. In Clementine’s workshop, a female GP asked a question in which she actually said “I hope it is ok to use the word obesity in here…” – this was literally seconds after Clementine had spoken about the pain of being labelled this way! And another person somehow felt compelled to tell us all about her incredible weight loss story, even though moments earlier a mother had been sobbing while telling us all about her daughter, very unwell with anorexia, whom she’d had to resuscitate several times…It was staggering how, after witnessing people’s stories of lived experience, people could still thoughtlessly voice fatphobic opinions.

And of course, there were many people who did not stand up after Nicole’s speech. Some people who thought that the conference got a bit too “personal” this year. Notable researchers who were absent. And one particularly awful occurrence  – which I will tell you all about next week.

We started some Courageous Conversations, and at times it felt like we could indeed change the world. But we have a long way to go!

I’m going to bed for a week.

Take care of you.

*The coffee was still bad