Last week I promised to tell you about something that happened at the Australian & New Zealand Association for Eating Disorders (ANZAED) conference which got me seriously fired up. As I explained in last week’s newsletter, the theme this year was “Courageous Conversations,” with particular focus on ending weight stigma and combating fatphobia. Let’s face it, fatness and eating disorders were REPRESENTED at this conference, in a way that they hadn’t been before! The call to include larger people and to stop putting people on diets couldn’t have been louder.

There came a point in the conference when it was time for PRIZES. And a lifetime achievement award was given to an ANZAED member who is a very highly regarded academic and researcher. This woman specialises in adolescent body image and eating disorders, and has contributed a LOT to the field. It felt good to recognise her tireless efforts to bring adolescent body image issues to national awareness. But moments later, my colleague, psychologist Natalie Haider, tweeted a screenshot of our award winner’s latest nationally funded research project:

“The alternate day fasting trial in adolescents with obesity: A randomised controlled trial”.

I can’t begin to explain how much of a shock this was, to me and MANY others at the conference. So much of this person’s own research has referred to the fact that dieting is a major risk factor for the development of eating disorders. And here she is – principal investigator on a study that’s starving kids??

I did a little digging and found out more about this study. It’s an NH&MRC funded trial called the “Fast Track To Health.” The plan is to recruit 186 children aged 13-17. The project runs for 12 months, and they have been granted a whopping $1.2 million. The idea is to compare ‘alternate day fasting’ with a ‘standard’ calorie controlled diet (because we know how great they are, right!). They plan to run it out of Westmead Children’s Hospital in Sydney and Monash Children’s Hospital in Melbourne. 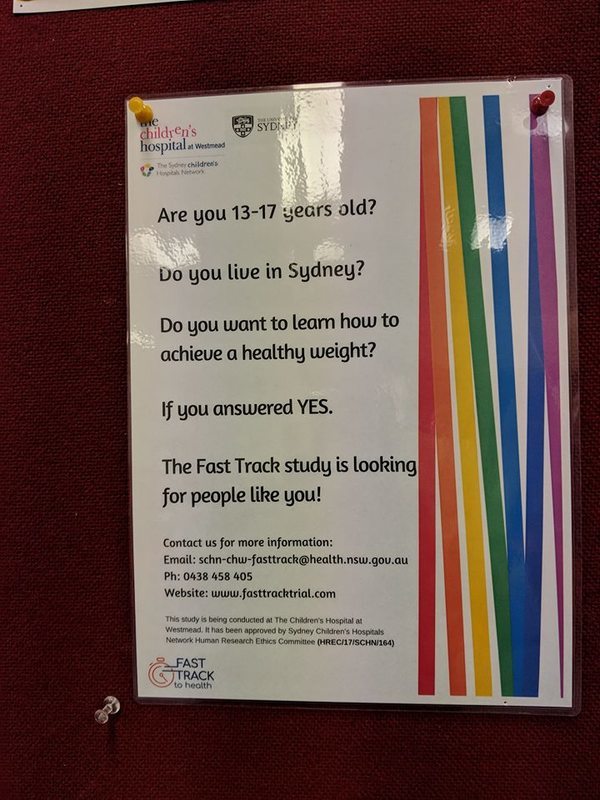 The recruitment sign displayed at Westmead Children’s Hospital: What this poster should actually say: would you like to learn how to weight cycle, AND develop an eating disorder? ASK ME HOW!…

Once I read the details of what is in store for these kids, my blood ran cold. For the first 4 weeks, all of them will be essentially starved – on a ‘very low calorie’ diet of just 800 calories a day. After that, the kids in the alternate day fasting group will be starved for 3 days of the week, allowed only 600-700 calories a day. On non-starve days they’ll be told to eat according to the Australian Health Guidelines. They’re allowed one ‘discretionary’ food a week, and one meal ‘off’ a week ‘to accommodate occasional eating out or social gatherings’.

It’s plain to see that this is a very extreme diet involving a shit tonne of restriction for these poor kids. FOR A WHOLE YEAR. So how on earth are they justifying this? Intermittent fasting, or alternate day fasting, is definitely ‘on trend’ right now. I even did a whole podcast on it with Fiona Willer. On the study’s information page they try to make it sound like a good idea by appealing to the Holy Grail of long term weight loss :

But has it?? The research on alternate day fasting is new, because IT’S A FAD, and there’s nothing out there in terms of long term (5 years plus) results. The longest time people have been followed on this type of diet is a measly 12 months, and even then the results are not good! For example, In this study, 100 adults were split into an alternate day fasting (AF) group, a calorie restriction (CR) group, and a control group. Everyone did the diet for 6 months, and were then followed up 1 year later.

At 1 year, the average weight loss (a piddly @6%) was the same between the AF and CR group (and we know from countless other studies that the likelihood of this modest weight loss being regained is a sure thing). There were no differences between the groups on physiological health markers. Elevations in LDL (bad) cholesterol were seen in the AF group compared to the calorie restriction group. Also, more people dropped out of the AF group than the calorie restriction group, showing that on top of being pretty useless, people found alternate day starvation hard to stick to.

Now call me stupid, but it’s hard to see how this kind of result represents ‘successful’ long term weight loss?!

And even if they’d found GLOWING results, I’d still be loathe to recommend such an extreme diet to any child EVER, because of the strong evidence to show that teen dieting is a gateway to eating disorders. Did I mention that adolescence is the highest risk time for developing an eating disorder?

In a large prospective cohort study of 14-15 year olds followed for 3 years, dieting was the most important predictor of developing eating disorders. Kids who severely restricted their energy intake and skipped meals were 18 times more likely to develop an eating disorder than those who did not diet.

In another large prospective cohort study of over 16 00 9-14 year olds, dieting was associated with increased rates of binge eating AND greater weight gain over a 2 year period. And in another observational study of 2500 adolescents followed for 5 years, dieting behaviours increased the risk of both binge eating and weight gain.

These are by no means not the only studies that show the harm done to adolescents through dieting. And in addition to the research, there’s the countless stories from my clients who started their eating disorder journey as teenagers on diets. Dieting is a complete rabbit hole, a bottomless pit of despair that no-one should be forced down.

The American Academy of Paediatrics (2016) have stressed that we need to stop focusing on weight and pursuing weight loss in adolescents, and focus on helping kids of all sizes to look after themselves with health supporting behaviours:

“Discourage dieting, skipping of meals, or the use of diet pills; instead, encourage and support the implementation of healthy eating and physical activity behaviors that can be maintained on an ongoing basis. The focus should be on healthy living and healthy habits rather than on weight.”

I approached our award winning ANZAED researcher to ask her why she would be involved in this abomination of a study. She was very nice about it, and agreed that she’d had some ‘hesitations’ about getting involved. She said that she was in it to measure the psychological impact on the kids, and to monitor closely for signs of eating disorders. She seemed to think that we need to collect more data on the impact of dieting on the psychological health of teens.

This is where I completely disagree. I do not think we need to risk the mental and physical health of yet more kids in an attempt to add to the already enormous catalogue of evidence of harm. These are real people we are dealing with, not guinea pigs.

We need to stop it already. Our first duty as clinicians, health professionals, researchers, HUMAN BEINGS, is to do no harm! I strongly believe this study needs to be stopped. I’ve had a gutful. So I am lodging a complaint to the Ethics committee that approved it. I will let you know how it goes!

**Update – If this trial disturbs you as much as it did me, there’s a petition you can sign to get your voice heard. I’m asking for our MP’s and Health Minister to step in and stop the harm. Please sign it!